Smart cities may seem like a novel idea for now, but they’re becoming more of a necessity than people might think. For companies looking to capture the potential of the IoT market, it’s essential to understand the forces driving the need for smart cities as well as the trends that will give rise to new market leaders.

If you liked this article, listen to Dialexa CEO, Scott Harper, on Custom Made talk to the business opportunity of custom development:Listen to all episodes of Custom Made for insights and perspectives from industry disruptors and technology leaders.

Before thinking about specific aspects of smart cities that present new opportunities for businesses (which is covered in our latest ebook), it’s important to know the challenges that are sparking the need for change. Urbanization trends are the predominant factor, but “urbanization” is too broad a topic for companies to innovate around.

Interested in learning more about how smart city innovations are taking off? Download our latest guide, The Business Opportunity of Smart Cities.

Climate change isn’t a new topic. Climate departure, on the other hand, is a much more daunting realization than the simple fact that Earth is getting warmer. In 2013, 14 ecologists published a paper explaining that climate departure—the point at which the global climate transcends historic data and enters an entirely new state—will hit around 2047.

It’s no coincidence that climate departure is running parallel with urbanization predictions. According to research from UN-HABITAT, cities already account for 70% of global greenhouse gas emissions despite claiming just 2% of land area. And as urbanization trends grow, this challenge will only continue to increase.

Scaling to meet consumer demands simply won’t be possible without innovation in energy efficiency for sectors like transportation, industrial activities, waste management and more. Smart cities will be the key to making infrastructure and operations more efficient.

The Evolution of Employment

For a century, wisdom has dictated that job seekers find employment in large, stable corporations. These corporations have always been the center of activity for the workforce—employees commute to the office, work their 9-to-5, and commute home.

However, mobile and cloud technology have given rise to a new workforce reality. Some have called it the “gig economy.” The gig economy has defined a workforce that is increasingly based on a project model. More and more people are moving to freelancing, consulting, project-based programming, and other “gigs” as their primary means of employment. But this is only the beginning.

In December 2016, smartphone penetration eclipsed 80% in the United States, solidifying what people already assumed—that constant connectivity is now a fact of life. In the same way that employees started to expect consumer conveniences at their places of work, citizens will increasingly expect consumer innovation to integrate into city life.

It’s already happening, but consumer demands to control the city from their pockets—finding transportation, locating nearby restaurants and events, contacting representatives, etc.—will grow to the point that becoming “smart” will be the only option.

Just because there are public smart city services available doesn’t mean citizens will automatically opt in. There must be incentive for people to break habits and adopt the smarter ways of living necessary to keep cities efficient. According to the International Electrotechnical Commission, this means “citizens should…no longer be the users of city services, but also the providers and developers of smart city solutions.”

One example of this is how citizens are becoming energy producers through renewable programs. Adding solar panels to a home allows citizens to generate their own energy rather than relying solely on the grid services from the city.

All of these external forces are pushing cities to become smarter—both for greater efficiency and to discover new revenue streams that make up for the eroding services model. The time is ripening for businesses to contribute to smarter systems, especially as the proliferation of IoT yields seemingly endless amounts of data.

Smart City innovations are about to take off and change our lives in a big way. Download our latest ebook to see who is disrupting our cities, The Business Opportunity of Smart Cities. 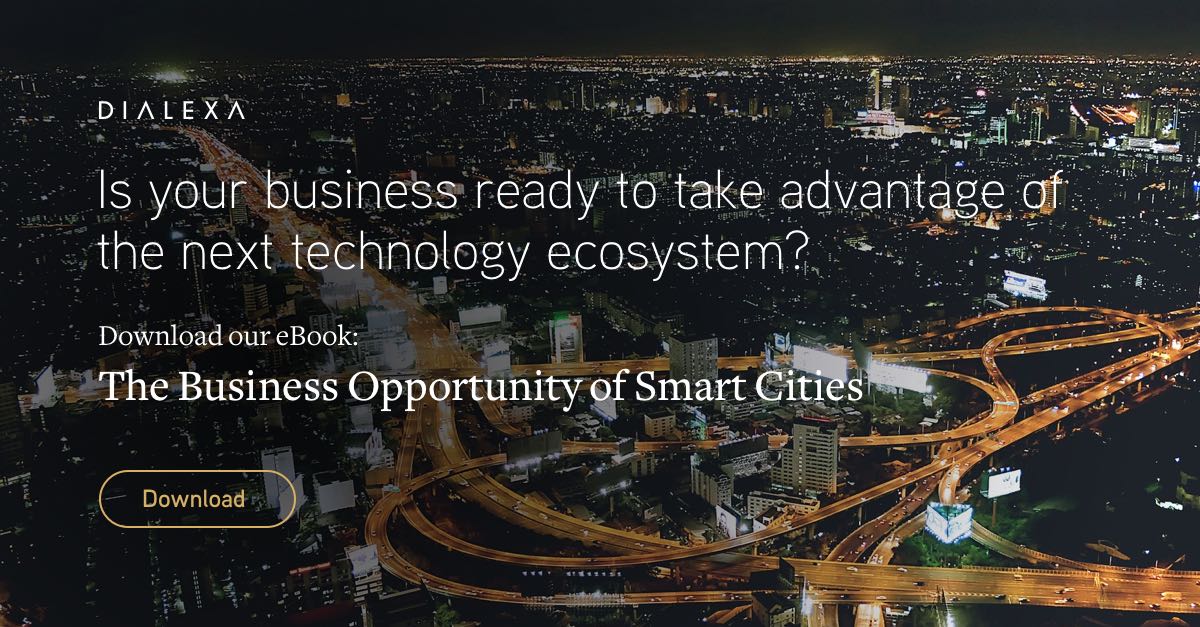 Scott is Dialexa's founder and CEO. A technology entrepreneur with an engineering and finance background and extensive experience in sales, product strategy, product development, operations and marketing, Scott has founded several companies and worked ... More About Scott »