The Architecture of the Internet of Things

The internet of things is not a new technology. So you may ask the question, so what? I have been hearing about this for years... why should I invest and chase the newest technology fad?

IoT is much more than a fad. The top 25 companies as of late 2016 have nearly 1B invested in them. The reason that so many companies and investors are strategically investing in the internet of things is that the technology window is finally opening due to smartphone adoption driving sensor prices down and capabilities up.

If you liked this article, listen to Scott Harper, Dialexa’s co-founder and CEO, and Chris Garrick, Sr Partner here at Dialexa, on Custom Made, where we discuss how to drive innovation within an enterprise organization:

This investment is a virtuous cycle that drives additional innovation in transport technologies, platforms, and new sensors. Thus driving the cost down further. This explosion is also being fueled by big companies like Google and Amazon investing in new IoT technology. A great testament: the acquisition of Nest by Google and its entry into the smart home market. The resonance of IoT with artificial intelligence, big data and predictive analytics cannot be understated either. These technologies help to drive more robust use cases and payback across many new IoT markets. Where maybe a direct business model would not work, now an indirect advertising/data driven model would.

The Architecture of the Internet of Things from Dialexa

Architecture of the Internet of Things

THE FIRST LAYER OF THE ARCHITECTURE is the actual “device” you will be connecting. Devices can mean many things and new types of devices are getting connected to the internet of things every day. Here are a few examples:

Because we are usually putting in small electronics into these “things”, our devices in practice create a few constraints for us:

We cover more details on some of the current sensors’ and actuators’ use cases in our Real World IoT guide.

The connectivity layer is how we get signals to and from the sensors/ actuators, the people, and computers or things on the other end. To simplify, let’s just discuss sensors. Connectivity starts at the sensor where there must be some low level protocol connecting the thing and its sensor to the rest of the world. This is usually a specialized chip.

There are a few ways from here for the device to connect back to the larger internet. First would be for the devices to build a peer to peer network where each device talks to the other and eventually one device is close enough to the larger network to “tap in”. This would be good for things that are disperse, move around and are close to each other.

ALL OF THE CONNECTIONS IN WORLD WILL NOT HELP US if we don’t have a way to apply these connections. Software is the way humans interact with machines and the IoT is requiring new software architecture and platforms. Some of these are acting as connecting hubs for smart homes, smart cities and smart businesses. Some are more personal assistants such as Amazon Echo or Apple’s Siri that will tie together all the things in your life.

The current exploding wave of Artificial Intelligence that is adding speech and vision recognition, is creating new more human ways for our machines to interact with us. These software platforms will continue to evolve with augmented reality and more cognitive power from the machines.

Another part of the software is the vast amounts of data that are being collected and processed due to the internet of things. One of the biggest sources of big data is IoT. For many systems, it becomes impossible to keep all the data, and periodic readings, exceptions or summarizations must be kept for each sensor. Predictive analytics and AI models can then be used on this data to again drive decisions and business value such as predicting when a retail store will run out of items based on consumption of items on the shelves.

We are both at the beginning of this chain and at it’s end. Interacting with the devices on one end and then using and working with the outputs of devices on the other end. On both sides of the architecture our devices are getting more like us and less like computers or machines. We wear a watch, we turn on the TV or use our dishwasher, we don’t need to think about them being connected- they just “understand” us. The Nest thermostat was one of the first great examples of this. It watches for when you are at home and starts to learn your patterns and adjust the temperature accordingly thus automatically saving you money. It thinks and acts like a human helper doing the same task I would. This is what is meant by a “smart device”.

On the other side, our things are starting to give us answers they have collected in a human way. Ask Alexa via the Amazon Echo what the temperature is, and she will talk to your Nest via the internet and in plain english tell you the temperature. In the same way, you can ask her to make it hotter or colder.

Our machines will become more empathetic, like electricity at the turn of the 20th century, they will become so ubiquitous that it will fade into the fabric of our lives.

If you want to learn more about the role IoT will play in your organization, download our free guide, Real World Internet of Things - A Foundation for Understanding IoT Uses for the B2B Enterprise. 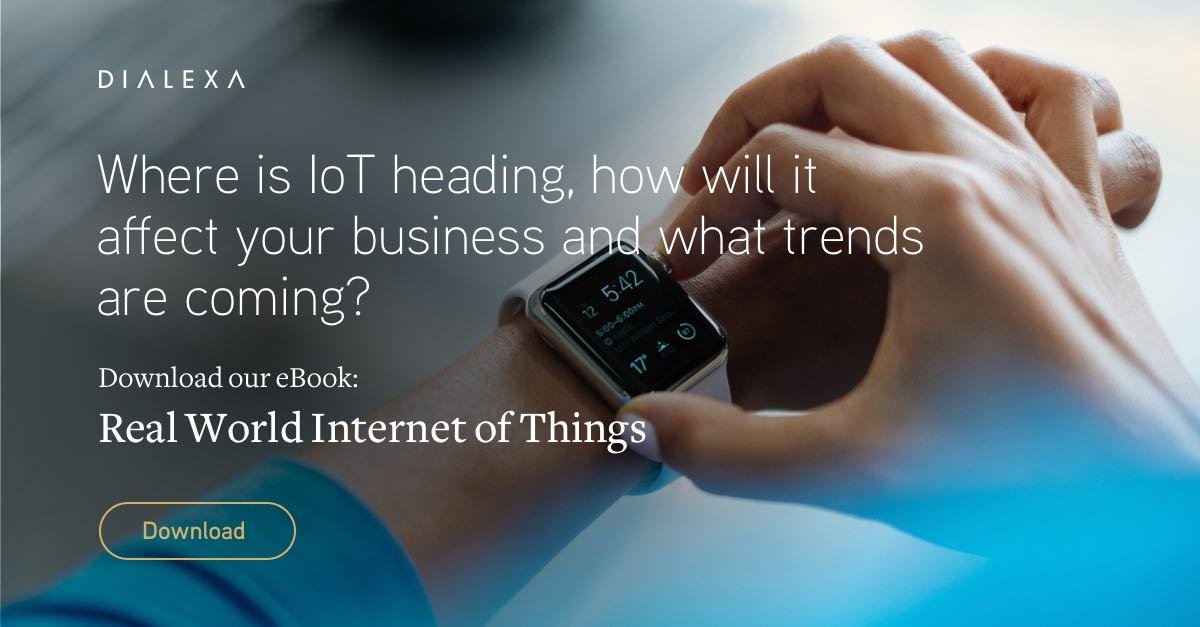